Nothing too shocking—if being completely honest with myself, you’ve probably already read a few blog posts like these, huh? Heck, having recently flipped through my own editorial archives, it looks like I’ve written about stuff like this in the past.

Instead of focusing on important, sales-driven “Qualities,” “Characteristics” or “Personality Traits,” I want to zero in on the stuff that’s commonly left off of industry-leading listicles, yet fits snuggly in the “Must-Have” category for sales recruiters like you and me.

Care to take a gander at what I’ve come up with? I figured as much—below, you’ll find five lesser-known must-haves that promise to produce bottom-line brilliance in the sales world:

Top-notch sales leaders have a history of figuring things out for themselves. Instead of tugging on the coattails of others when a problem arises, they get to work on finding a timely solution.

Pay close attention to candidates who’ve started a business of their own in the past or saw success in upper-level athletics. They’re not foolproof indicators, but they’re worth noting.

Strong people skills and persuasion tactics make for great sales leaders. That said, booming sales organizations are just as much about methodical execution, as they are individual talent.

So, in addition to looking for small errors on a résumé or cover letter, do some additional digging by asking candidates how they regularly organize their client contacts, desk and even inbox.

As far as sales is concerned, I don’t like to sugarcoat things—sometimes, it really sucks.

Because of this, seeing as how you’re looking for a leader, you’ll need someone who’s not only willing to shoulder their own sales-centric burdens, but those of fellow staff members, as well.

During an interview, ask about the way a sales prospect spends their free time. Do they run marathons? Cycle long distances? Growing up, did they earn their Eagle Scout?

Admittedly, sports are my husband’s department.

However, over the yeas, I’ve managed to pick up on a few things. For example, for the sake of today’s recruiting conversation, don’t hire the sales equivalent of an aging Kobe Bryant.

And before you jump all over me—yes, I understand just how talented of a player Mr. Bryant was during his glory years. Still, once Father Time caught up with him, all that was left was a gifted player who refused to take advice from anybody …

All he cared about was money.

Based on what I’ve seen, in the long run, those who are coachable tend to be better coaches. On top of that, no sales leader will arrive at your company without any flaws of their own …

To properly lead, they’ll first need to be coached—that’s all there is to it.

Whether it be in sports, at school or at a past job, having worked directly under someone in a position of authority might indicate that they’re now ready to call the shots.

Okay, so of the points I’ve presented on this list, this one isn’t all that unique—it’s everywhere.

But with good reason—it’s key that a top-tier sales leader be competitive. To take themselves, their sales reps or a company to new heights, they must crave the thrill of competition without stepping on others to win.

More often than not, multi-sport athletes with a lifetime of athletic participation or academic wizards with a host of awards to their name are used to being held accountable for their competitive demeanors.

Ready to hire the right sales leader? The above five points give you a great place to start!

Don’t get me wrong, though—the all-encompassing list of “Lesser-Known Must-Haves” is substantially lengthier than the one I’ve presented in this blog post …

You knew it was coming—this is where you get involved!

In the comments section below, hit me back with a few of the things you consciously make an effort to look for when seeking to hire a game-changing sales leader for your company. 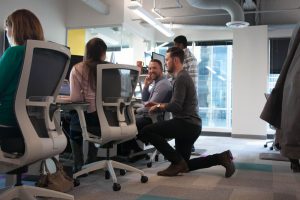 Through our years of experience in the startup, sales and recruiting trenches (pre/post Avenue Talent Partners), Debbie and I have […]