Whether you’ve launched a startup of your own or have worked for one, you know that things can be difficult to say the least—it just comes with the territory.

The good news is that while problems are bound to arise, the culturesurrounding the startup world is typically fresh, dynamic and fun. Truth be told, for the right person, the startup scene can provide said person all they ever wanted in a career.

The same can’t be said for everyone.  Have you ever had that terrible conversation of “it’s time for me to move on” from one of your most prized, dedicated and effective performers? Sadly, this happens and usually catches the team completely off guard while scrambling to figure out “why”.

One day, they’re fully engaged and smiling. The next, their desk is empty and being fought over. Making matters even worse, losing a valuable part of your staff can really hinder progress …

Does any of this sound painfully familiar?

If you’ve been left scratching your head after a star employee’s sudden departure, consider a few of the following reasons for why they might’ve left:

1) They’re Being Overworked and Neglected

First thing’s first—regardless of whether you’re working for a startup or have taken your talents to a larger, more established business, if you plan on becoming an authoritative figure within your industry, overexertion will need to frequently rear its ugly head.

Though great startup employees already know this, their loyalty to your company starts to waver when they feel that they’re alone in their efforts—that nobody else is making similar sacrifices.

Think about it—the beauty of startups largely comes from their communal appeal. The best startups thrive via the collaboration from a group of smart, driven people coming together to make a major impact.

Everyone lifts where they stand, drinking coffee late into the night to place an order, meet a pressing deadline or finalize the slides for the next day’s presentation.

When left alone for an unacceptable amount of time in the epicenter of the “grind”, this environment can demean, demoralize and downright weaken an employee’s will to keep putting their best foot forward.

The result? They hit the road, and don’t think twice about coming back.

2) Virtually No Signs of Worker Appreciation

No, your startup’s most gifted employees don’t need a pat on the back every five seconds, but they certainly need some sort of validation as to the quality of the work they produce.

Just because someone is highly effective, doesn’t mean they’re a machine. At the end of the day, they’re human, and want to be recognized or rewarded for doing a good job.

You’re running a startup—I get it.

You might not have the budget to foot the bill for an expensive token of appreciation or a pay raise, but there are plenty of ways to show worker appreciation that cost next to nothing …

In fact, the easiest is completely free—offer up a heartfelt “thank you” with a conversation on why you value their work and what they did to earn your praise.

That’s all it takes.

Having worked with startups for the better part of two decades, I can confidently say that this reason is easily one of the biggest for which the best employees exit stage left…

They’re tired of lofty and unrealistic goals with zero backup as to why they’ve been formulated along with visions and dreams with no actions to support them. Lip service is just an easy way to appease the mediocre or put a Band-Aid on important issues, and your most brilliant employees know it.

Seriously, few things are more frustrating in the working world than feeling like you’re aimlessly spinning your wheels just because someone told you to.

Remember, we’re talking about the kinds of startup employees who frequently go on to become powerful entrepreneurs, themselves.

Because of this, they’re not prone to merely going through the motions like most people…

If you’re the one in charge, give your brightest minds something to create, and then show them how their efforts are leading to real, quantifiable results—nothing less will suffice.

Don’t get me wrong—I understand that improving your company’s bottom line, pleasing stakeholders and increasing productivity are all critical, but the moment they take precedence over the wellbeing of people and your customers, you’re standing on shaky ground…

Well, I disagree with “Gordon Gekko” when he said “greed is good”.  When you take a short-sighted, greedy approach valuing your bank balance more than being a good boss to do meaningful business, you’ll soon see a sharp uptick in each of the below items:

Be honest with yourself for a moment—what solid employee would want to work tirelessly in this kind of environment?

They shouldn’t have to, and they don’t—they just leave, instead.

Remember, actions speak louder than words. What are you doing to lead by example to inspire your best of the best?

While reading this post, if at any point you felt the need to change something specific about the way your startup is run, I hope you wrote it down. From there, make a conscious effort to adjust.

The sooner you’re able to, the more likely you’ll be to keep game-changing talent from packing up their things, leaving you and the rest of your tight-knit team behind.

But enough about what I think—what are your thoughts on this? Drawing upon past experiences in the startup sector, what kinds of reasons have you seen for which high-quality employees suddenly quit?

You know the drill—in the comments section below, hit me back! I’m interested in seeing what you have to say, and plan on responding to each and every one of you.

Until then, thanks for reading, and have a killer day!

Note, I originally wrote this on LinkedIn. 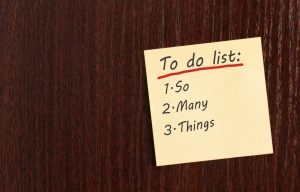 Buzzwords are an intriguing thing… When they are used correctly, they help make workplace communication more productive and efficient. However, […]