If someone asked me what the most powerful lesson I’ve ever learned in my career was, I would have to say that “success is rooted in the Golden Rule.” I’ve seen no other principle in life that has been continuously reaffirmed day in and day out.

That’s why one of the hardest things for me to watch is talented people and startups colliding in a mess of failed communication and lack of respect throughout the interview process. Hiring A+ talent is one of the most important things a startup can do if they want to grow, but so many times they shoot themselves in the foot with how they handle this part of the process.

After a recent engagement where selfishness on the hiring company’s part almost cost them an amazing candidate, I couldn’t stop thinking…how does this affect organizations in the long run? And how does it benefit them when they get it right?

The truth is, the recruiting world has been pretty one-sided in favor of employers for decades. They’ve been able to get away with jerking candidates around because prospective employees haven’t really had a voice. But the game is changing, and employers aren’t going to be able to keep this approach up for much longer and expect to stay competitive.

I know what I’ve seen in the last 20 years, but I wanted to check what the data surrounding candidate experience illustrated as well. I can’t really say I was surprised to find that it supports my conclusions.

So that said, here’s what I found.

A positive candidate experience makes your startup attractive to the best talent.

Why is it that some hotels like The Mark in New York can charge $1000+ a night for a suite when the Best Western is down the street for less than $200?

Answer: because they are designed for different clientele. The person who is going to stay at The Mark is shelling out a LOT of cash…and expects a lot in return. And while a Best Western would love to attract customers that were willing to pay $1000 a night, the reality is, they don’t have the hotel to justify that.

Forgetting about the cash flow for a second, let’s look at the task at hand  in terms of skills. Talented individuals usually bring in way more value than they cost a company in terms of a paycheck. And in that respect, they are the “luxury buyers” in the talent marketplace.

Top performers want to spend their precious time and talent in an environment that is worth it, because they know their work environment has a big impact on their ability to perform at their best. So if you want to bring in high performing employees who are going to move the needle, you need to think like a 5-star hotel:

Things like these above are why leaders like Zac Lowder, the SVP of Sales & Member Experience at Inspire (one of my dream clients and an all-around lovely human being) have so many employees that absolutely love working for them and doing great things.

Zac’s secret to success? In his words:

“Finding seriously talented people who can truly be a part of our carefully built culture is one of the hardest and most important aspects of our business. And delivering a delightful, memorable candidate experience is a must whether they join the team or not.”

And it’s why Forbes ranked them as one of the best SMB companies to work for in 2017 (which is the cherry on top and my next thing I found).

A positive candidate experience makes it easier to hire quality talent in the future.

Statistically speaking, a consistently bad interview process can have a pretty severe effect on your efforts to hire quality employees in the future. In fact, according to a study done in 2014, if a person has a negative experience while interviewing, they are 64.3% likely to tell their friends and family about it and 27% likely to actively discourage others from applying.

Fortunately, I’ve seen good buzz spread just as virally. And that kind of buzz can be a huge boost for your efforts to hire the best people.

Sticking with Zac’s story, just imagine what being featured in Forbes is doing for his recruiting efforts. If talented people want to know they are applying their skills in a place that’s worth it, what do you think that kind of publicity is doing to help?

Google is another great example of a startup that did this well. And it wasn’t the bean bags – it was their mission regarding their people:

“Removing barriers so ‘Googlers’ can focus on the things they love, both inside and outside of work.”

The bottom line: if you’re creating a captivating environment that’s clearly linked to a mission people are closely tied to that they’re proud to work in and actively showing prospective team members just how great it really is with the way you interview, the next time you go to hire you’ll have a pool of talented people who are actively fighting to get their feet in the door. And that’s a great problem to have.

A positive candidate experience could save you a lot of money.

Back in March of 2017, Virgin Media actually quantified how much money a bad candidate experience was costing them. Spoiler alert: $5.5 million per year (though the final estimate was 3-4x that).

Seriously….7-8 figures per year, just from being more attentive to how they treated the people they were interviewing? YIKES.

What they found was that 18% of the people who were applying to join their team were actually customers, and the negative experience during interviews created 7500 cancelled subscriptions as a result. Which isn’t even mentioning the impact that those people probably had on their friends and relatives when they shared the story of their experience with them.

Here’s the thing – I know not every business mixes customers and potential hires. But my point is (and as Virgin Media found out), this is something to be aware of. There can be financial repercussions of a bad buzz about your startup in the talent marketplace (in addition to the direct ones from making a bad hire).

Additionally, keep this in mind: what’s the financial loss of having the wrong people working at your company in terms of productivity?

The mindset that powers a positive candidate experience.

Richard Branson has been quoted as saying, “Customers do not come first. Employees do.” While company culture is another can of worms entirely (and a prerequisite if you want to see any of the positive effects from a positive candidate experience), I think this quote really embodies the approach startups (and all companies for that matter) need to take with their interviews too.

I can’t stress this enough: people ARE the foundation of your business. Your company and its results are only as good as the people that are doing the work in the first place.

That’s why it’s just as key to show prospective employees you’re the kind of company that values the talents of its people during the interview process if you want to bring the best on board to help you grow. After all, what kind of environment would YOU prefer to work in…a place that wants to collaborate with you to achieve its goals, or one that wants to “use you”?

To make this practical, here are the 3 things that have the most impact on candidate experience according to candidates themselves (via this study by CareerBuilder) :

If all else fails, ask yourself “if this were me, how would I want to be treated or communicated with?” Putting yourself in someone else’s shoes will never steer you down the wrong path. #perspective

I would love to hear from you all…what things have you done to create a more engaging candidate experience? Leave a comment below! 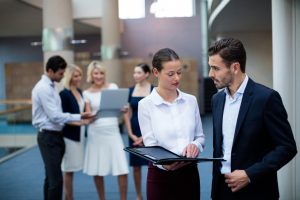