Awesome, earth-shattering businesses start with a great idea, right? Yes, but there’s certainly more to it than that. Google, Amazon, Lego and Disney were all built upon the foundation of a groundbreaking idea, but they also had quite a few entrepreneurial aspects working positively in their favor.

Don’t get me wrong—I’m not trying to take this to a Malcolm Gladwell level or anything, but truth be told, there’s much more to corporate success than the flicker of the proverbial lightbulb. But enough with the chit-chat—like any good businessperson, let’s take control of the conversation, diving headfirst into the meat of the matter.

There are roughly 7.4 billion people on Earth. And though you might be smarter, more educated and blessed with more drive than a 2016 Dodge Charger, odds are still incredibly high that you’re not the first to have thought of your idea. Still, this doesn’t mean you shouldn’t proceed with your business, you’ll just need to do some research before making things official.

If you find that a business has beat you to the punch, there’s no need to hang your head. You’ve confirmed what you thought all along—you really did have a good idea. Look for ways to differentiate your business’ products and services from those already within the space. Lastly, be leery of vicious copycats. If alone in a genuine money-making arena, you’ll soon have company.

Great ideas are one thing, but they mean little without timing. If too far ahead of the rest of society, even the most innovative of thinkers are bound to have their ideas squashed by a lack of widespread demand. For example, have you ever heard of Six Degrees? Exactly. Let’s try another one on for size, real quick—Facebook? That’s what I thought.

Believe it or not, Six Degrees was Facebook before Mark Zuckerberg was even old enough to have hair under his arms. The idea was ingenious, but America wasn’t ready for it. It’s easy to be too early or too late with a concept. Successful businesspeople, however, arrive right on time.

Think for a moment about how quickly business environments can change. Interestingly enough much of the time, business-related factors aren’t even solely responsible for the rapid fluctuations that take place. The state of the American economy, new technology and even current affairs should all be considered before taking the entrepreneurial plunge.

Planning Is Key, But Execution Is Everything

Millions of ideas have looked good on paper—Pizza Hut body spray, anyone? That said, more often than not, success falls by the wayside when execution isn’t approached with the same enthusiasm the ideation process received.

Making dreams a reality almost always comes down to one thing, and one thing alone—people. You’re one person; you can only do so much. However, with the right people in place, your individual weaknesses can quickly become communal strengths. Take your business’ recruitment efforts seriously. There’s a good chance they’ll either make or break you.

Don’t get me wrong—my intention is by no means to play the cumbersome role of “Negative Nancy” with all of this. By all means, if you have a business idea you truly believe in, the last thing you should do is sit idly back, watching other like-minded people do something about it. Simply arm yourself with the right, realistic mindset—it’ll do you a great deal of good.

I’ve said my piece; it’s now time for you to say yours. No matter the successes or failures you’ve had as entrepreneur, I want to know what you think of what I’ve presented. Is a good idea all that’s really needed? Or, do other factors come into play? If you’ve got something to share, please take to the comments section below. As always, can’t wait to hear from you! 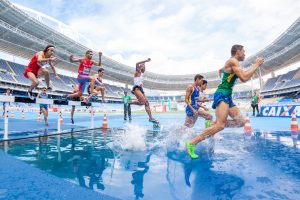 It’s an interesting image, isn’t it? Believe it or not, the above image is of an Olympic event known as […]