I’ve written about emotional intelligence (EQ) in the past, but there’s a reason I keep revisiting the topic—simply put, it’s at the core of everything I do. Seriously, I’m in the business of connecting small companies with innovative, forward-thinking sales talent.

For these kinds of relationships to work, EQ isn’t an added perk—it’s an absolute necessity.

That said, if you’re new to the idea of EQ, let’s make sure we’re on the same page …

Basically, it’s an individual’s ability to recognize, understand and influence personal emotions, based on those of surrounding people.

And while it might seem like one of those “common sense” strategies, trust me on this one—it’s not. For example, have you ever found yourself doing any one of the following:

If something from the above list struck a chord with you, no worries—few are the Stephen Hawkings of the EQ world. For salespeople, however, it’s in their best interest to get as close to genuine “EQ Ingeniousness” as humanly possible—it’s in their job description.

Relax—from time to time, we all feel this way.

Instead of throwing in the proverbial towel, though, do something to improve your EQ. Better yet, do five things to improve it—keep reading to find out how:

Here, the general rule of thumb is to listen twice as much as you speak.

And you know what? It’s a good way to go about conducting business. No, I’m not perfect at following it, but I routinely making a conscious effort to listen more than I speak.

I care about my audience, and when I listen more, they can tell.

The same applies to salespeople, but I propose that they take things a step further. Instead of just listening more, salespeople must listen with what I like to call, “real intent.”

Listening with real intent means that the listener isn’t only set on listening, but on adjusting their behavior in accordance with what’s been heard.

Whether it be a pitch, product demo or presentation, be willing to adapt your sales routine to meet the needs of what someone’s told you—they might not say anything, but they’ll appreciate you for it.

PS, it’s a great rule to follow with all of your relationships, not just business.

It was Tim Ferris who once famously said, “A person’s success in life can usually be measured by the number of uncomfortable conversations he or she is is willing to have.”

So, raise your hand if you’re a fan of making yourself vulnerable …. (crickets)

Yup, that’s what I thought.

As human beings, we’re drawn to what makes us comfortable.

And while many of the items found on society’s list of taboo topics needn’t be discussed during a sales call, there’s at least one that you shouldn’t shy away from—your own deficiencies.

You’re a sales professional, not a saint. If you’ve made a mistake, own it and then apologize. In the end, when you’ve gone out of your way to be honest, prospects will respect you for it.

Take it from me, though—they’re not.

Think of the last time you were at the doctor’s office for a physical (cough, cough) and were tapped on the knee with one of those small, funny-looking hammers.

This is the perfect example of a reaction.

It’s quick, unconscious and immediate. When combined with the negative emotions often brought about by frustrating customers, the results usually leave much to be desired.

On the other hand, responding is different.

When you respond, you first notice how you’re feeling, and then choose the best course of action to bring about a desired result. Yes, this technically could still lead to a not-so-stellar outcome, but more often than not, cooler heads prevail.

Empathy is the grandaddy of EQ evidences.

As a salesperson, are you lacking in this department? Not an issue—no matter how long you’ve been in the sales hustle, there’s always room for improvement.

The key to improving sales-centric empathy is to better understand your own emotional responses. The more you’re able to dissect the feelings and thoughts that prelude a response, the better you’ll be to put yourself in someone else’s shoes.

Practice makes perfect, but it’s as simple as that.

What Do You Think?

If you know me personally, you know that I love to talk sales.

The only thing that brings me more joy, however? Combining my love of sales with one of the industry’s greatest assets—EQ.

But enough about what I think …

Where are you at with all of this? In the comments section below, I’d be interested in hearing from you about what you’re doing to improve your EQ as an industry-leading salesperson.

Can’t wait to chat! As always, thanks for reading and have an awesome day! 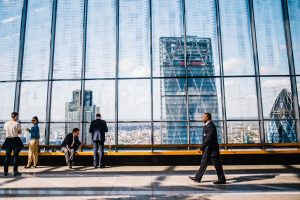 Truth be told, the best salespeople do more than drive revenue for their employers. They inspire coworkers, strengthen customer relationships, […]