I’ve worked with a few sales leaders recently whose teams would quite literally fall on the sword for them… and that got me thinking about some of the qualities that I’ve seen in exceptional sales leaders whom I’ve had the absolute pleasure of working with/for in the past.

Sadly, poor leadership is more common than not these days. In fact, statistically speaking the average VP of Sales currently only lasts about 19 months (this was a huge eye opener for me).

While many people have highlighted the costs of poor leadership, it’s worth noting, that when A+ leadership is in place and operating on all cylinders the benefits are equally as compelling – the recent clients I mentioned above have all seen 3X+ growth in less than a year as a result of epitomizing what a leader should be.

So that said, here are four things I’ve always seen the best sales leaders do to get more out of their teams and drive greater results for their companies.

In my experience, this has been the defining factor for the highest performing teams I’ve worked on or with. The leaders of these teams have always taken the time to understand their people and are open to their feedback.

By doing so, they create environments where their teams experience something called psychological safety:

“Psychological safety is a belief that one will not be punished or humiliated for speaking up with ideas, questions, concerns or mistakes.”

It makes sense… the only way you become excellent at anything is to improve on the things that didn’t go right. And if you don’t feel like you have the space to do that, the pressure becomes insurmountable.

Great sales leaders understand this and give their teams space to be honest about mistakes and errors and hold them to a high level of accountability to improve at the same time.

2. Great sales leaders have their team’s back.

Just about every sales leader I’ve worked with that has had my respect has been someone who has taken the time to understand what makes me tick and moved heaven and earth within the company to help me be successful.

They didn’t ask me or their teams to do anything they haven’t done or wouldn’t be willing to do themselves, because they understood that not everything that ties into a sales person’s success is directly the responsibility of a sales person.

It’s hard to sell something that the market doesn’t want or in a way that the customer isn’t receptive to. And great sales leaders always listen to the feedback their people are giving them to create actionable insights.

Additionally, they understand that there are a range of selling styles and tools salespeople can use to be successful and shape their coaching styles to the individual team members they’re working with rather than using a one-size-fits-all strategy.

Again, this approach creates a safe zone for a sales team to operate within at a high level, as they know that their leader is looking out for their best interests and not going to throw them under the bus when it’s convenient.

I think it’s incredible that McDonald’s can deliver a consistent customer experience even though they’re a highly complex, multi-billion dollar corporation that is spread out across the entire globe.

Their secret to pulling this off? World class business systems that help each franchise run to their standards independently of central leadership.

And that consistency earns them the trust and respect of those that work for them, in addition to higher levels of performance. They help their team succeed via systems that enable instead of disable. Because in the end, it’s a lot easier to follow someone with a vision, a plan, and the results to back it up than someone without.

(Related: Simon Sinek details this idea in his book Start With Why. Highly recommended and one of my ultimate favorites!)

4. Great sales leaders are an asset in front of clients.

In my experience, the best sales leaders are almost always those who have done the job and know what’s at stake on a deal and embrace the buyer journey as much as I would. As a result, when you put them in front of a client they actually multiply your efforts as a salesperson.

However, so-so sales leaders often have the opposite effect.

For instance, I had a HUGE meeting of a lifetime with an enterprise client once that my boss at the time participated in. The table stakes were massive for both parties involved on this deal (worth many many millions) and the meeting was an opportunity to better understand what the client needed and why before a big trip to meet with their exec team.

Unfortunately, the ego of my boss during said meeting was astronomically counterproductive. He immediately jumped in to “educate” the client on our space, what we do, why we do it, and how this was a “no brainer” for them without ever asking a single question.

As a result, I had to spend the next month+ and more doing damage control just to keep the deal alive!

A remarkable sales leader understands exactly what his/her people are doing and what they need (or don’t need). They assist their people when needed as an enabler rather than a distraction from the task at hand, and which one they are usually becomes pretty apparent when they’re in front of a client or executive team.

Richard Branson has been quoted as saying “Customers do not come first, employees do.” And that’s exactly the mindset that the best sales leaders I’ve worked with have adopted.

They block and tackle up the chain, fight for their employees’ success, and do everything in their power to foster an empowering work environment. They’ve mastered the ability to create win/win scenarios for all parties involved and are able to galvanize the team.

As a result, they earn the respect and loyalty of their salespeople (even when times get tough) while seeing exceptionally higher levels of performance to boot.

Enough from me, I want to hear from you: what attributes/skills have you found the best sales leaders possess? Join the conversation in the comments below! 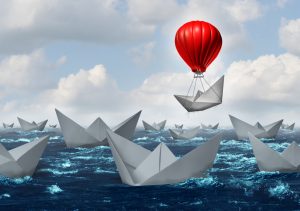